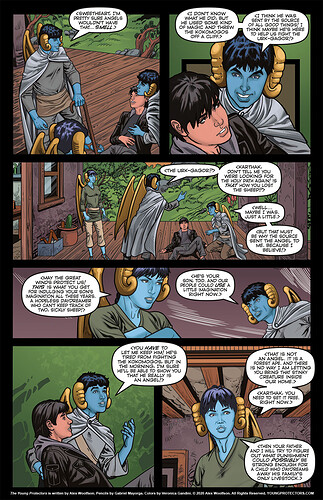 (And then GO VOTE EARLY! Don’t leave it to chance. Not this year. We’re all counting on you! Let’s send a clear message about what kind of country we want to live in!)

The only reason I’m able to keep making The Young Protectors is because of the very generous support of readers like you on Patreon. Especially now. And we had two new folks sign up over the last few days! So, please join me in sending out a very special thank you and welcome to the new members of the Woolfpack this week!

Thank you so much for your amazing support, Eric and Heather! You and the other members of the Woolfpack are all the real superheroes of this comic!

So! Karthak thinks Cory was sent to him by a higher power to help save his people. But his parents remain unconvinced. And Cory is caught in the middle of all this.

Who are the Urk-Gagor? Why do they need to be fought? What is the Holy Path? Is it connected to the Source of All Good Things? And what kind of punishment would be strong enough for a child who daydreams away his family’s only livestock?

Tune in this Wednesday to find out! Hope to see you there!

Hm. I’m now getting a strong impression that we have an upstairs-downstairs sort of situation on this planet: an upper level where the winged people live, and a lower level where the “forest apes” and kokomogos are. Perhaps we should tentatively call this world Stratos?

It’s also becoming clearer that Cory isn’t a completely new creature to this world, that there are other humans, but they’re seen as animals, so we also have a Planet of the Apes situation as well? It’s still odd, though, that Cory’s clothing doesn’t raise any doubts about his “animal” status, and that the one time he spoke, it was interpreted as growling.

And why this harping about his smell and how stinky he is? Do humans just really smell bad to them, or is there a lingering smell of graveyard and zombie rot on him somehow? If Cory had a bath and a change of clean clothes, would he still smell stinky to everyone?

I think what might really help is if Cory learned how to use his telekinesis to fly and soon. That might make these folk re-evaluate Cory’s worth.

nooo you can’t throw him to the wolves!! uh, dinos… uhhh kokomogos…
hmm. So Karthak is a believer and his parents aren’t…

Do humans just really smell bad to them, or is there a lingering smell of graveyard and zombie rot on him somehow?

To answer your question. Might be a bit of both. Cory was just in a very stressful situation. Twice.